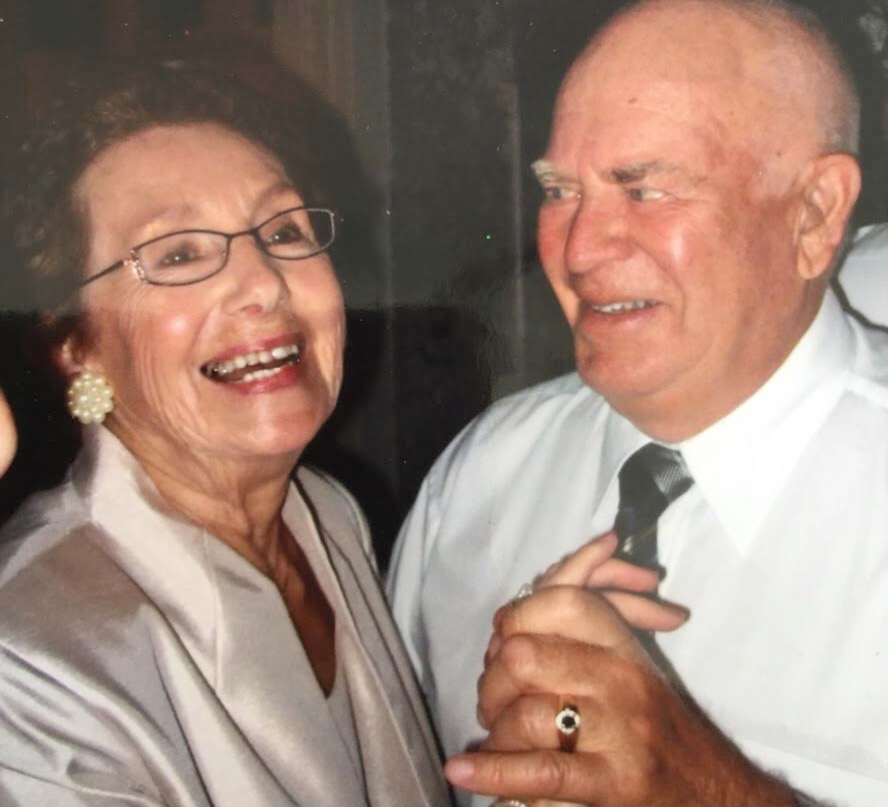 In 1949, I was a 17-year old kid venturing forth from the confines of a tiny hamlet called Snowflake, Canada to the bright lights of Pilot Mound–a town of 700,  20 miles away. I boarded with a local family while taking my Grade XII.  Soon after arriving and when the ice was in the skating rink I was recruited by the Pilot Mound Pepperettes girls’ hockey team to play defence.  I knew very little about the rules of hockey and not a great deal more when the season was over, but had a wonderful time being a part of that early team.  Out on the ice from the age of 5 and always wearing boys’ hockey skates I was a strong fast skater.  Ken saw me playing and decided he wanted to meet the newest player. There were regular dances held in a number of small town community halls and at a dance hall at a local lake.  These dances with the Royal Canadians Band playing, provided the first opportunity for Ken and I to meet.  After one such dance, he asked to take me home. I said “No” but told him that in his deaf ear so when he came to pick me up at the end of dance, I decided  “oh well, whatever”  and that was the beginning of our relationship.  We went to these dances together but I also went to the dances with other guys from the Pilot Mound United Church Young Peoples’ club.  Commenting about Ken, my boarding-home mom, told me that he was not too bad a guy; his parents were fine people and he was certainly better than his wild friend.

Ken and I continued to date during my Grade XII year with my interest in other boys gradually decreasing.  On the night of my graduation, a friend had organized a progressive dinner and I invited Ken to the dinner and the graduation dance afterward.  The Fall of 1950 found me attending Success Commercial College in Winnipeg with Ken working in the winter at the Canada Packers plant.

During the farming season, Ken would drive in from Pilot Mound on the weekend and we would go on double dates with friends. The city offered many fun places for young people in 1951, fine restaurants like Rae and Jerry’s which is still open today, night clubs where famous entertainers and orchestras performed, and architecturally stunning movie theatres.

Over the course of our time together, I fell in love with Ken.  I had given up an earlier goal of becoming a social worker knowing that I wanted to be where Ken was, understanding  that eventually we would be on a farm at Pilot Mound.  I took an Executive Secretarial course and boarded with some family friends.

I don’t exactly remember how Ken proposed.  Unknown to me, he had selected a beautiful engagement and wedding ring set and one night he asked if I would accept the ring.  I said, “Yes.”  After graduation, I began working as the secretary for the President of Success Commercial College.  When I applied for a new job in the editorial Department of the Country Guide and Public Press, working as personal secretary to the editor, I removed my ring and put it safely away for a year.  In those days women wearing engagement rings were thought to be only temporarily in the work force and I would never have acquired the position. In the spring of 1953 I began wearing it again and we started to plan a fall wedding.  My mother, an excellent seamstress, fashioned a beautiful ice-blue satin and lace wedding dress for me. In the fall of 1953 we were married in Snowflake 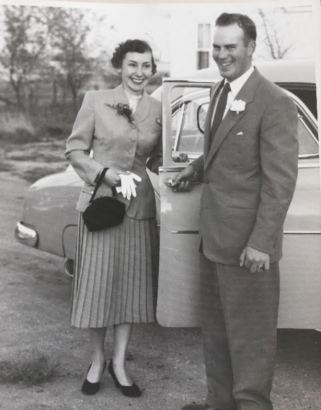 United Church.  The reception was held in my parents’ living room. 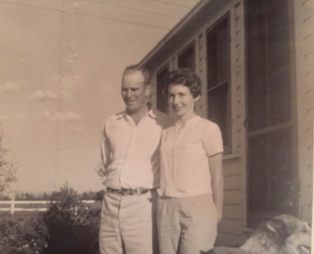 began when we moved to the family farm.  Our first daughter was a tiny tot and that first fall we welcomed another little daughter to the family. Although rural electrification had come to Manitoba farms in 1948, 1955 was still on the periphery of almost pioneer times with no indoor plumbing.  Ice wells were still in use and cream separators, cook stoves, washboards, butter churns all had a place in our life.  Before too many years, several labour-saving appliances lightened the work load for both of us.

Our family grew to include four daughters and one son, all very healthy children the raising of whom provided us with a million adventures. While our family was young, kind parents on both sides of the family gave generously of their time taking care of the children to allow us little holidays.

When asked for “words of wisdom” as to how we were able to build an enduring and happy relationship for 61 years a few thoughts come to mind. Firstly, Ken and I were both very hard workers.  We had great respect for each other—I knew that Ken’s handshake sealed a deal; and he knew that if someone was my friend they were a friend forever.

Of course there were quarrels and disappointments, one with the other, as it is impossible to always have smooth sailing–there were several “adventures.”  I didn’t particularly like working with Ken on the farm.  There were never instructions and he was quite impatient.  Ken thought he could drive through sloughs with his tractor and then he’d get stuck, and say to me, “Hop on this tractor–pull out the throttle gradually and put it in forward and pull me out of the mud.”  We were moving cattle from one pen to another and he asked me to stand in front of a bunch of cattle as they would try to escape.  There was no way I was standing in front of a herd of cattle as they stampeded toward me, and I got into trouble for jumping out of the way.  Once a half-dead frozen calf had been carried in from a field to be dried off in front of the oven and laid to rest in the bathtub while Ken was curling.  The calf came to life and was running around the kitchen–and when I called Ken he told me to tie it to the leg of the kitchen table as he had to finish his curling game.

However, we were able to “fill gaps”—where one was weak in a certain area the other was strong. We were equally committed to giving our kids opportunities to get off to a good start in life, regretting that for too many years money was in short supply.

Although we loved traveling together and managed to visit several countries, we also went on separate holidays.  Being free to pursue individual interests and have some time away from each other strengthened our marriage. Ken loved going on hunting, fishing, and curling trips with buddies; and I travelled as a member of the Manitoba Ladies Curling Association, giving curling clinics around southern Manitoba and coaching youth curlers.  I went on Toastmistress trips to conventions and once went to Edmonton for a two-week horse camp.  There were always new stories of adventures to share when we would return home.

Community volunteering was important to both of us. No matter what we were involved in individually–whether for Ken it might be starting a Manitoba/ North Dakota golf tournament, the Border Classic, the Sportsman Bonspiel, building a swimming pool, running a Car Bingo to put artificial ice in the curling rink; for me, chairing the pool committee for over a decade, starting a foundation, heading church dinners, being on the funding raising committee for the Pilot Mound Millenium Recreation Complex–we often worked side by side supporting each other.

We enjoyed many family gatherings throughout the decades with our big extended family, both his and mine–all of which played a part in strengthening our relationship.

Underlying our marriage was a deep unspoken commitment that we would try to build a happy and stable home for our children.  After 61 years we found ourselves with a wonderfully large family of children, grandchildren and great grandchildren who  brought us great joy through the long years of our marriage.

***This love story is particularly near and dear to me as Ken and Fay are my parents.  Although my father is no longer with us to tell his side of the story, I can honestly say that he adored my mom.

Share your stories of love on my page and join with me in our crusade against hate, as Love always wins. I hope that by sharing people’s love stories, my children and viewers will feel hopeful and inspired to create their own. It’s my way of spreading love to wage war against hate. Love will win out in the end. View all posts by Broadcast Love